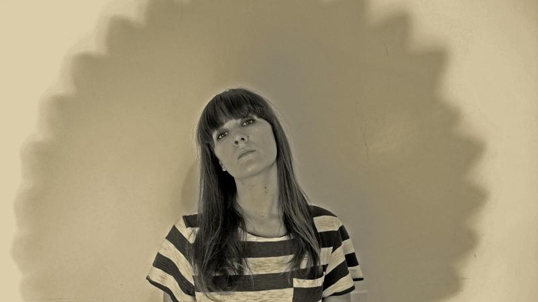 Bio:
A new force in song craft, Cate Le Bon currently resides in Cardiff’s infamous French quarter and befitting a songwriter who only writes in the dark, her music is a heady and highly personal Gallic stew of equal parts Nico, Malkmus and the chronicler’s own emotional observations on the impossibility of existence.

Disheartened by the constant stream of dead animals she found herself burying in her parents farm in Penboyr, West Wales, and inspired by her fathers impeccable record collection (The Velvets, Neil Young, Pavement et. al) Cate packed her things and begrudgingly set sail for the neon lights and ample rehearsal space available in her country’s capital.

Following a string of club night shows in the city, Cate caught the attention of Super Furry Animals front man Gruff Rhys who over a cigar and a glass of brandy offered her some support slots with his band. Cate continued to gig extensively in the UK releasing singles and a Welsh language EP (Edrych Yn Llygaid Ceffyl Benthyg) on the Indie Record label Peski.

Knowing that there’s never too much of a good thing, Rhys roped Cate into his hip hop exchange program Neon Neon. What began as a guest vocal appearance on their debut single, “I Lust You,” resulted in a year of touring the world as part of their band.

During a month’s break from the road, with her confidence and enthusiasm doubled, Cate retired to Y Gerlan in the mountains of North Wales for a prophetic 10 day recording session which resulted in the release of her debut full length album Me Oh My to rapturous critical acclaim. On the back of the album’s US release in April 2010, Cate completed a two month tour stretching from SXSW in Texas to Café Hotel in Los Angeles, sending postcards from Boston, Buffalo, San Francisco and New York along the way.

Like a dutiful daughter Cate returned for the British festival season, seeing out the summer at Glastonbury, The Great Escape and Field Day to name a few, and snatching free time between performances to write new material in her North Walian bolthole.

At the dawn of 2011, Cate re-entered the studio to start work on a new record of her own. Drawing on her experiences of the last year, Cate has created collection of pop nuggets that sound like they’ve fallen off the back of a broken carousel, imbued with the playfulness of Faust and Syd Barrett and the tropical melodies of Os Mutantes. Existential word play abounds and fuzz fused guitar lines tear through like an angry bee in a CAN on CYRK, which is due in the US via The Control Group label in early 2012. “Puts Me To Work” is the first single from that record.